After more than 1.000 days of war the fragmentation of Yemen is rapidly progressing. In the course of a by now three-year war the winners start manifesting themselves, no longer corresponding to the parties in power before the beginning of this war. The war losers are the Yemeni civilians, above all the children. According to UN data 22 million people have become impoverished and 8 million are on the brink of starvation.  Even if the war should be terminated in a near future the destruction caused will continue to have an effect both in the fields of reconstruction and traumatisation.

At the time being the acts of war are concentrated on air strikes of the Saudi coalition at Houthi areas, positional warfare at the borders of Houthi areas and the Red Sea, Houthi rockets attacking Saudi areas, the US drone war in the Southern provinces and alQaida attacks against the Houthis and security forces dominated by the Emirates in the South. The Emirates intensify and extend their military dominance in the South.

The map clearly shows that the Houthis, compared to the situation before December 4th, somewhat retreated:  on the coast of the Red Sea in the direction towards Hodeidah, in Jawf in the North, and in alBaidha, where the Eastern border is fiercely fought over between the Houthis, alQaida and Daash. After Ali Abdullah Saleh´s death is was expected that major units of the Republican guard and the central security forces break away from the Houthis and, as planned by Saleh, fall into line with Saudi forces. This has obviously not happened. Most of the units affiliated with Saleh had been integrated before and their weapons taken over.

The areas shown on the map in light blue in the South and the East map still keep being referred to as „under Hadi´s legal governance“ by Western media but Hadi´s government has no longer any substantial influence on goings-on, neither in military nor in political matters. Hadi himself can only act upon consent of the Saudis and is decidedly denounced as governor of the South by the Emirates, ever more spreading out in the South.

The North Western areas defended by the Houthis suffered 541 air strikes of the Saudi coalition in December 2017, causing the death of hundreds of civilians. The number of air raids increased by 67 % compared to November 2017.

A total of 15.760 air raids had occurred between the start of the war on    26th March 2015 and the end of 2017, hitting many more civilian than military destinations. Incidentally, more than 200 civilians were killed since the beginning of 2018.

Large areas are not affected by war operations just now since the Saudi coalition concentrate air raids on the Northern provinces occupied by the Houthis and the scenes of land warfare.  Nevertheless, supplies are totally insufficient almost everywhere. Although the Emirates boast about extensive humanitarian services and an improved infrastructure for the people in the South, most of the infrastructure offered is absolutely inadequate and the population is exposed to shortage of supplies and malnourishment. Power supply is somewhat better but gasoline is available at horrendous black market prices only, gas is scarce, the Internet more often than not disconnected and the prices for basic supplies of foodstuff have increased fourfold since the beginning of the war, while public servants have been waiting for their pay for six months. Extreme poverty makes young and grownup males in their desperation opt for military service both in the South and with the Houthis in the North (also children) where it is most likely to earn money. This economy of scarcity and shortage of food and money appears to have been brought about on purpose, since it provides a steady supply of soldiers on the one hand and enormous gains for war profiteers and on the black market by forced up prices on the other, in turn giving rise to corruption and, as a consequence, criminality. Nevertheless, security which had been strictly monitored by the Houthi-Saleh coalition, has somewhat improved in the course of the past weeks in the South too.

After Ali Abdullah Saleh´s death sympathy for the Houthis rapidly deteriorated.  While the Houthis had been considered national heroes despite successive bullying of the population in Sana´a and beyond because the successful rocket attacks on Saudi territory invigorated Yemeni patriotism, the past weeks had become unbearable – this also aside from intensified Saudi air raids. Saleh had been planning for quite some time to „open a new page“, i.e. to defect to the Saudis, and had prepared for this move. The Houthis had started to scent acts of treason in Saleh´s party and jailed leading members of Moutamar and suspected military officers or ousted them. They also increased the wave of arrests of critical journalists and social media activists. Sana´a has become subjected to a state of martial law with checks, police raids and abuse. The discontent of the population keeps growing and can no longer be attributed to Saleh. In terms of political development the Houthis survived the loss and/or the exit of the Saleh fraction relatively well with their Ansar-Allah-Party, replacing various ministers and other high ranking persons with their own representatives.

Saleh´s Moutamar, once holding more than 80 % parliamentary positions and appointing all ministers, in retrospect turns out to have been a paper tiger and is in a state of dissolution following the death of Saleh and his deputy Arif Azouka. 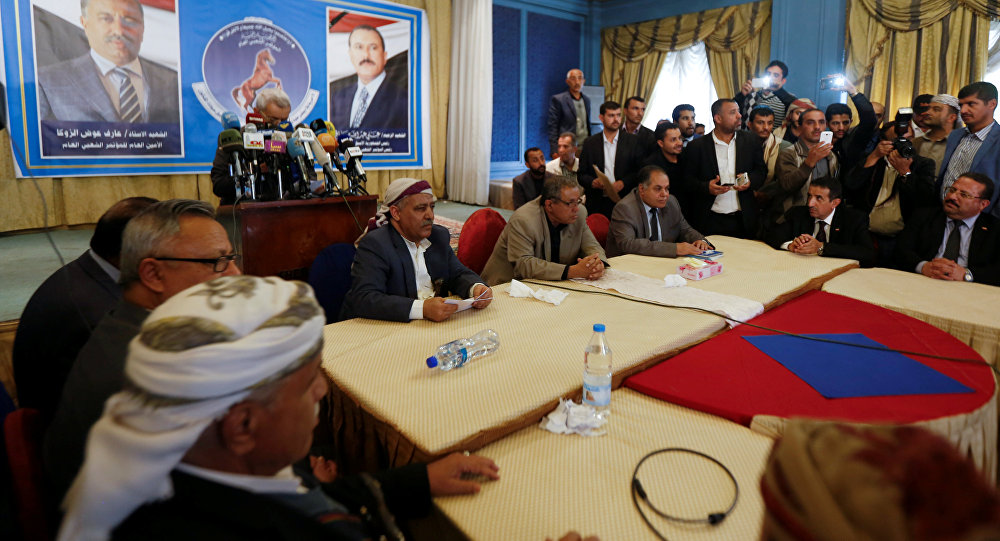 Quite recently, 56 party members have decided the new establishment of the Party in Sana´a, i.e. with Houthi consent, elaborating basic rules and the composition of the Party which had been tailored to the person of the leader for 30 years. In a first statement they do not side with the Houthis but declare Saudi Arabia as enemy. Sadeq Amin Abu Ras, a former minister of agriculture, has been elected as chairman. Ahmed Ali Saleh, having applied for the position as an ally of the Saudis, was disregarded.

The Emirates have apparently realised that without his father Ahmed Ali Saleh who has been living in the Emirates since 2012 is no suitable candidate for becoming a leader in Yemen.

With the „Political Council for the Transition in the South” the Emirates had created an organisationally already well developed instrument (with provincial councillors in almost all provinces in the South and an attempted puppet government), primarily targeting at a separation from the North. However, with the Islah having been expelled and Moutamar dissolved only the Houthi structures have remained as functioning political organ.

Accordingly, both the Emirates and Saudi Arabia as occupying forces should have recognised that an end of the war at the time being would no longer offer any political structures, organisations or confidents for steering the developments in the North of Yemen. Under these circumstances the Emirates and their leader, crown prince Mohamed bin Zayed, known for hating the Muslim Brotherhood, had to leap the hurdle and contact the Islah party whose leaders live as emigrants abroad upon having been chased by the Houthis in the North and banished by the Emirates in the South. Crown prince Mohamed bin Salman und crown prince Mohamed bin Zayed, accompanied by security ministers, met with the Islah party leaders Mohammed AlYadumi and Abdulwahab AlAnsi, first in Ryadh and then again in Abu Dhabi (without MbS) to discuss a future political leadership and respective structure. Yadoumi und Ansi are leading representatives of the Muslim Brotherhood in the Islah Party, but had to confirm  – besides other conditions- that the Muslim Brothers will have no influence in the Party.

The negotiations are still underway and allow developing hope for an end of the war operations. This outlook is supported by the arrival of the OSEGY representative Maan Shuraim in Sana´a for negotiations with the Houthis. Since the taking office of the new UN-Secretary general Guterres the attitude of the UNO in the Yemen agenda has shifted from an executive body of Saudi interests towards moving into an apolitical and, above all, humanitarian direction.