Two dates are important for the most recent developments in Yemen:  the 21st September, when the third anniversary of the Houthis march-in into Sana´a was celebrated, and the days since 17th September, when the UN Plenary Meeting takes place in New York.

The manifestation organised by the Houthis on Sabain-deployment place in Sana´a has been a conclusive proof of an evaluation completely out of touch with reality of the “International Community” in respect of the situation in Yemen. While Abdrubbah Mansur Hadi, the „internationally recognized president“, who has been a president without people and without a country for the past three years, in the UN plenary session in New York is permitted to request the expulsion of “ insurgents“ by means of military action in a statement broadcast worldwide, tens of thousands Yemenis keep demonstrating against 30 months of having been bombed by Hadi´s  protectors, and simultaneously, for unity in the de facto government, consisting of Houthis and  representatives of Moutamar. 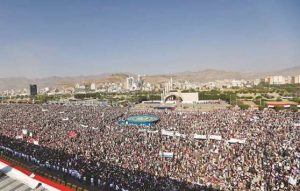 Sana´a, 21st September, 2017: Manifestation at the 3rd Anniversary of the conquest of Sana´a by the Houthis

The UN charity organizations in Geneva, but also other international NGOs call for a termination of the war, since the deprivations of the population because of poverty, isolation and epidemic plagues have exceded all bearable norms. They call for free access to all areas in Yemen, in order to

bring relief aid to people in remote villages cut off the outer world – with the exception of the bombs dropped by the Saudi coalition. Graphics of the supply situation show a paradox: The situation of the population in some areas „liberated“ by Emirate troupes in the South, in particular in Shabwah und Abyan, is worse than in densely populated, destroyed areas in the North, governed by the Houthis, but extensively covered by emergency care via the harbour of Hodeidah.

While the North is being ever more rigorously governed by the Houthis and a pragmatic share of power – in the wake of several crises between Saleh´s Moutamar and the dominant Houthis  – has become apparent, a dissolution of the leadership structures  is looming ahead in the South. Hadi is not accepted by the Emirate occupation forces and will, in all probability, fail to gain a foothold in Aden. Although Ahmed bin Daghr, Hadi´s minister president, managed to achieve an arrangement with the occupying forces and appears in public at sundry activities he does not enjoy any political influence. Whether because of incompetence or on purpose the Emirate occupation circumvent a calming down or consolidation of the present situation, they keep the population at bay by means of an economy of scarcity and a missing infrastructure, while, simultaneously, putting ever more squeeze on the supervision by armed units. AlQaida lead a two-front war against the Houthi-Saleh-troupes in the frontier areas of alBeidha und Taizz on the one hand, and against the “Anti-terror Alliance” of the Emirates and the US in Hadramaut, Aden and Abyan on the other. Depending on the prevailing situation alQaida joins forces with Hadi´s remaining troupes and/or Saudi Arabian mercenaries.

Yemenies, whether in the South or in the North, tend to regard Saudi Arabia and the supply of weapons by the US and Great Britain as the cause for their miserable situation.

While the situation in the North is quite evident and the conflicts openly manifesting themselves, numerous armed and also unarmed forces act in the South, manoeuvring under cover, thereby further irritating the population and leading to locally divers constellations.

UN-Intervention, primarily representing Saudi Arabia´s interests under Ban ki-mon, is attempting a new mediation approach under Gutierres, with Kuwait playing a part. The most important signal for a new beginning is the nomination of the Palestinian Maan Shuraim as deputy of OSEGY Ismail Ould Sheikh Ahmed (whose function was extended until February 2018), declared persona nun grata by the Houthis. Shuraim will now enter into direct negotiations with the Houthis und Saleh´s Moutamar, while Sheikh Ahmed will continue to attend to the interests of Hadi and Saudi Arabia.