More than six years have passed since the outbreak of the revolution in Yemen, almost three years since the Houthis have been occupying Sana´a, and more than two years since the Saudi coalition has commenced destroying Yemen by continuously bombing the country, and since the “legitimate” government has abandoned the Yemeni population and has been attempting to preserve the vestige of their power out of exile.

The nationwide destruction is reflected in the daily life of the individual, the families, the tribes, jeopardizing the bases of existence, causing impoverishment and pauperisation.

In the past two and a half years the country furthermore was affected by fragmentation. Above all the areas not under the relatively tight surveillance of the Houthi-Saleh disintegrate to an ever more alarming extent, are exposed to the supervision of the Saudi occupying forces in the Southeast and the Emirates in the South or alQaida and “government loyal” military, all promoting the fragmentation.

What Yemen unifies at the time being is the cholera

Despite the unfortunate political situation  a number of phenomena apply to and cover the entire area of the “old“ Yemen such as – however cynical this may sound – the cholera epidemic, having spread over all provinces except Soqotra und Hadramaut, the largest province in size but scarcely populated  and hardly affected. Most afflicted are the provinces of Amran in the North, where 20,5 % of the population have succumbed to the illness, and alDhale in the South (20,1%). A very high rate of casualties is also reported from al Mahwit in the northern mountains (19,6%). As at 7th July altogether 297.438 cases of cholera were registered for the period 27th April to 7th July 2017 with 1.706 fatalities. The epidemic is soaring rapidly, at a much higher speed than originally assumed. In Sana´a (city) 12,3% percent have fallen ill, in Aden (province) 9,4%.

This implies that the services of the international aid organizations and the local patient care function everywhere well or equally unsatisfactorily. Cholera is comparatively easily manageable with simple means such as hygienic, clean water, salt and sugar, but even all of this, especially clean water, is rare in most areas. 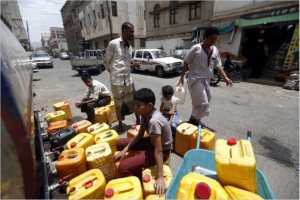 Water for free is mostly only available at mosque wells and children are engaged to queue, fill water into the canisters and carry them home.

Cholera is life threatening above all for old and weak people, for ill persons and small children who quickly dehydrate. Children are especially affected by the development of the war. Hundreds of children were killed or injured by bombs and drones, ever more starve to death, die because of pandemic diseases such as cholera.  More malformed children are born and maternal mortality is increasing too. Only the soonest possible end of the war and the reconstruction of the sanitary and medical infrastructure could remedy this situation.

What divides Yemen is politics and occupation

The nationwide similar sanitary distress is juxtaposed by diverging developments on the political sector. With more time passing the North is consolidating into an autonomous unity with a transitory government in Sana´a, and a network of makeshift social institutions and infrastructure. Despite the sporadic bombing, a poor economy and considerable poverty, this creates the impression for the citizens of living in an orderly state system, the more so since terrorist acts have become rare.

Entirely different is the situation in the South where the Saleh regime for many years has been most brutally avoiding the creation of political groups, primarily those with a tendency towards secession and independence.  Haraka had successively become established in 2007, subsequently organising the revolution in Aden. Following the resistance to the Houthi-invasion in the spring of 2015, the Muqawama local resistance movements have been joining, with only a fraction of them radical secessionists. However, the Southern groups had been split up into almost 70 entities, consisting of citizens´ initiatives and associations but also militias. Political groups forming in the South to an ever increasing extent have become a pawn in the hands of Hadi endeavouring, while in Riyadh, to retain some of his power with the aid of the Muslim Brothers, and of the Emirates desirous to aline the South in meeting their own targets. In this context it is understandable that Hadi dismissed the governors of Hadramaut, Schabwah and Soqotra, because they are in leading positions involved in the “Political Transition Council of the South”, striving towards independence of South Yemen.  Hadi is mainly backed by the Islah party and the Muslim Brothers, afraid of the devastating influence the Emirates might exert.

For the first time responsible politicians have refused to comply with an order. The three governors have since been under house arrest in Jeddah. Aidrus Zubeidi, the very popular resistance fighter from alDhale, and previously also dismissed governor of Aden, has taken the lead of the “Political Transition Council of the South”. A major demonstration took place in Aden-Mualla on 7th July, celebrating the anniversary of the suppression of the civil war, in which the South wanted to leave the association with the North in 1994. Aidrus Zubeidi, cart horse of the Emirates for the secession of the South, in his address adopted yet another political target of the Emirates: banning the Muslim Brothers and the Islah party from the South. This evokes major problems for Hadi and also Saudi Arabia, in particular in the topical situation with Qatar, since numerous influential Yemeni Muslim Brothers, residing in Riyadh as esteemed promoters of Hadi and as agents of the Saudis, try to manipulate the developments in Yemen in line with their interests. The counter demonstration staged by Hadi and the Muslim Brothers in Aden at the same time as alZubeidi addressed his audience, met with pitifully few followers, demonstrating once again that Hadi has become nothing more than a paper tiger in Yemen. 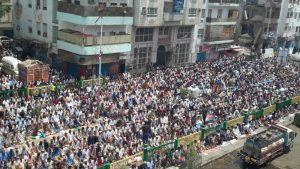 Aden-Mualla, 7th July, 2017. Manifestation at the anniversary of the 1994 lost secession war with an address delivered by Aidrus alZubeidi for the Political Transition Council of the South.