The parties at war in Yemen have been negotiating for five days in a small village outside Biel to end the armed dispute and sign a peace agreement after nine months of conflict.

The negotiations should have started with a seven-day ceasefire. This truce was not only postponed for 12 hours but was also immediately broken. The three negotiating parties keep casting the blame for the breach of  the agreement onto each other and the media are dominated by war propaganda.

However, not all parties involved in the armed conflict are represented at the meeting. The negotiating participants are: 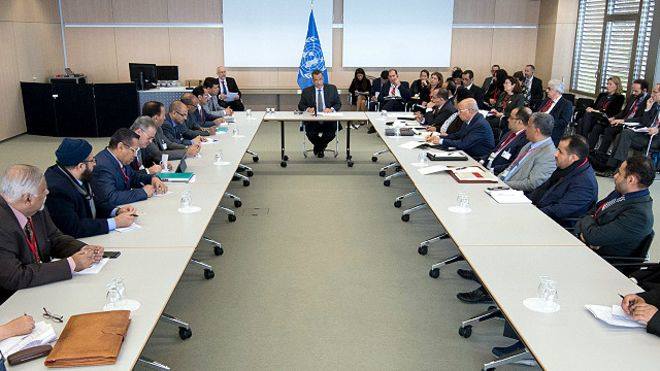 After numerous delays the negotiations between the Yemeni parties assembling in a remote village near Biel to come to terms to end the war on permanent basis finally commenced on December 15th. 24 delegates represent three fractions of the conflict.

The negotiating teams – with the exception of the Houthis – mainly consist of political representatives having hold functions during the past decennium and having had a say in political events. In compliance with a UN request two women are among the 24 delegates.

Not represented at the negotiations are the following parties heavily involved in the war in Yemen: the representatives of the so-called coalition, having bombarded the country since 26th March, foremost Saudi Arabia, the Emirates, Qatar, Bahrain, Kuwait, the USA, Great Britain, Jordan, Morocco and Sudan, and also ground forces from the Emirates and Saudi Arabia with mercenaries from Sudan, Eritrea and mixed private armies, mainly consisting of South Americans, under orders of the Emirates and Saudi Arabia.

The negotiations are chaired by Ismail Ould Sheikh Ahmed, the UN special envoy, tightly organising the negotiations. This includes the obligation on the part of the participants to maintain silence about the progress of the discussions and only authorise the discussion leader to issue a press release.

Although these regulations favour a „to be among themselves“  of the Yemeni parties the Gulf states intervene, as do the „international community“ and other interested parties, exerting a permanent and sustainable pressure on the negotiators.

The by far strongest pressure targets at terminating the war as quickly as possible to permit aid supplies to enter the country and meet the most urgent needs of the population – with the aim to prevent substantial numbers of refugees leaving the country. 170.000 Yemenis sought refuge   –  foremost in Africa so far. The international community would most welcome locking up the Yemenis until a peace agreement materialises, but this solution is jeopardised not only by internal conflicts and tensions in Yemen but also by interests on the part of the Gulf neighbours. In the course of the subjugation of Yemen by Saudi Arabia and the Emirates, their respective interests and targets have diverged, in turn rendering Ex-president Hadi´s ruling in the South (who wanted to please both “patrons”)  ever more impossible.

The conflict between the Emirates and Saudi Arabia escalates because of the Islah party and the Muslim Brothers, regarded as Hadi´s supporters by Saudi Arabia while pursued as terrorists by the Emirates. The second centre of conflict are Ali Abdullah Saleh and his son Ahmed Ali Saleh, enjoying life undisturbed in the Emirates. Saudi Arabia considers the Salehs as traitors, and wishes to continue imposing sanctions on them and remove them from power in Yemen for good while the Emirates speculate for Ahmed Saleh to become a high ranking personality again.

And both the Emirates and Saudi Arabia opine differently as regards territorial goals in Yemen.

Two tasks, until now very important for the negotiations, could be accomplished at least in part, however.  First, an exchange of prisoners: 300 captivated Houthis were exchanged, by common accord, for 265 representatives of the „Sharia” (legitimacy) as referred to by Hadi´s fraction.  But the Houthis did not free the two most important hostages, defence minister Subeihi and Hadi´s brother Nasser, head of the secret services of Aden, Abyan and Lahij.

The second goal reached concerns a long chain of lorries, carrying aid supplies, eventually having entered Taizz after months of being cut off from the outside world.

This only came about after Hamud Mikhlafi, the Salafist resistance leader against the Houthis had left Taizz for Aden and was shown there on TV.

Next to impossible appears to be a solution of the claims to power. The military situation as shown on the map of Yemen on December 9th: 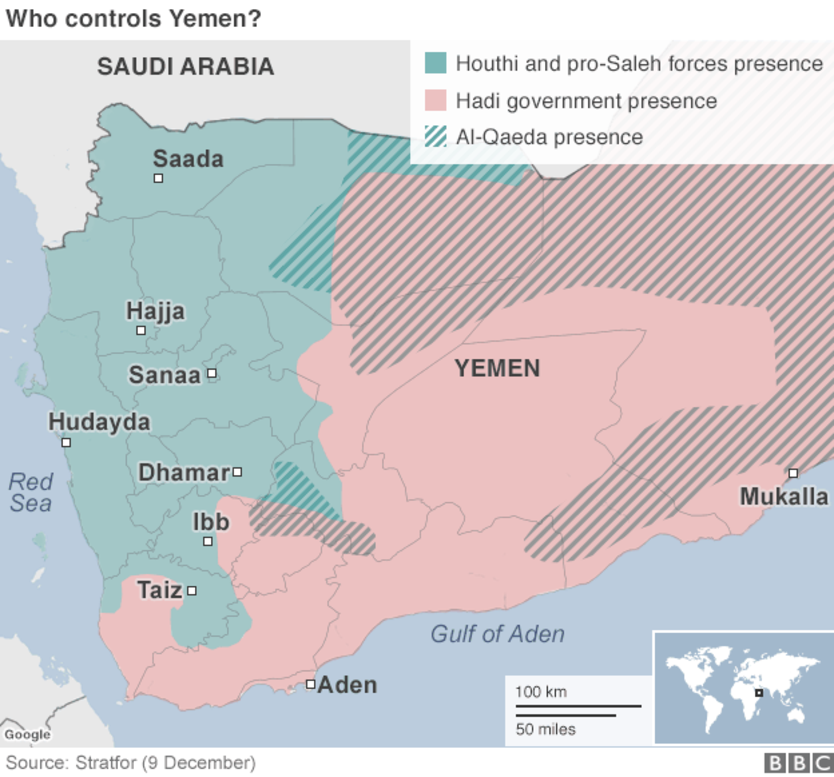 The territorial situation somehow resembles the North-South frontiers as existing in 1990, but the provinces of Taizz, Ibb, Dale, alBeidha, Marib and alJauf are partly controlled by the Emirates and partly by Saudi Arabia while the Houthis , unchallenged, control large parts of the former North Yemen and – as not shown on this map – have extensively entered the Saudi provinces of Jizan, Asir and Najran. The troops of the coalition fight for a coastal strip at Bab alMandab and have not ceased attempting to take Taizz. Further targets are the oil fields in Marib und alJauf. Saudi Arabia is first and foremost keen to control oil and gas resources in Yemen whereas the Emirates look for zones of influence on the Red Sea and the South coast. According to present signals the “International Community” is in favour of a separation of the country, with the frontiers only slightly diverging from those in effect until 1990.

The discussions were interrupted on December 19th. A working group was

formed to set up a mechanism for a cease fire by mid-January 2016.