You will have been wondering not receiving our customary Newsletters for quite some time. A very understandable explanation might be the fact that events due to the aggravation of the war become obsolete on a daily basis and a particular situation may no longer be topical the following week.

Please excuse this discontinuance of information provided and accept a temporary summery of the status quo:

In 26 March 2019, Yemen has entered its fifth year of war which had started in 2015 by Saudi-led airstrikes in Sana’a, the capital of Yemen. In these four years several challenges have exacerbated the risk of a huge outbreak, resulting in the majority of Yemen cities suffering from the absence of electricity, a huge shortage of water and gasoline for cooking, contaminated water for agriculture, poor sewage disposal systems, and escalating violence everywhere. Families fleeing their bombed homes in search of other accommodation have been confronted with no considerable difference in daily life commodities. Hospitals and schools have been drastically devastated and can no longer cope with the influx of people in the light of the deteriorating basic infrastructure.

Martin Griffiths, the United Nations Special Envoy for Yemen proclaimed that, “despite the “remarkable” recent progress, Yemen continues to suffer from a humanitarian crisis described by the UN as the worst in the world”.  On the other hand, he met Houthis in Oman recently to continue his endeavors to accomplish the implementation of the Peace Agreement concluded in Sweden in December 2018 to redeploy warring parties in Hodeidah.  Nevertheless, fierce fighting continues, jeopardizing peace efforts. The number of victims of land mines and unexploded ordnance has become ever more alarming while efforts at a reduction prove almost impossible according to the experts of the Red Cross. Moreover, according to the Guardian, “60,000 Yemenis are conservatively estimated to have been killed since 2016, the majority from Saudi-UAE coalition bombing. In addition, the man-made humanitarian crisis has been caused primarily by the blockade imposed by the coalition”.

In addition, the health situation is worsening due to the rising number of cholera cases, malnourished children and attacks on hospitals. Cases of cholera have been escalating in 22 of the 23 governorates in Yemen since 2017 due to the devastation of the infrastructure, of water supply, health care and public facilities as a result air strikes committed by the Saudi-led coalition. According to Doctors without Borders, the overall number of suspected cholera cases from January 2018 to January 2019 reads 387,860, with 526 associated deaths. Children under five represent 32.0% of all suspected cases. At the same time, around 360,000 children suffer from acute malnutrition, while more than 80,000 children died of starvation. Nearly one third of the reported cases are children under-five, according to the World Health Organization (WHO). Furthermore, still ongoing fighting is targeting hospitals in several areas in Yemen in violation of international humanitarian law. A recent air strike near a hospital in Kitaf in northern Sa’ada killed at least eight people, five of them children. In Aden, Doctors without Borders have stopped admitting patients to their clinic after the staff had been seriously threatened and a patient kidnapped and killed. In Taiz governorate intensified fighting between different factions of the pro government army has sparked off the burning of Al Mudafar hospital. However, only civilians will pay the bill …

Children, women and elderly people are the most vulnerable who bear the brunt of the war. Instead of going to school ever more are either forced by the Houthis to go to frontlines as children soldiers or lured with money to go to the Saudi-Yemeni borders   despite international agreements to protect children. According to statistics published by the Yemeni Ministry of Human Rights, the number of children recruited by the Houthis  between 2015 and 2018 amounted to 10,000.

In this context it should be mentioned that many families do see a welcome, dearly needed income in having their boys being drafted for military service. A similar phenomenon applies to ever younger girls getting married prior to the officially prescribed minimum age, since a daughter moving to another family is one hungry family member less.

A number of further circumstances illustrate the present miserable situation:

Civil servants have not been paid for two years and find it ever more difficult to support their families.

Many bread winners were killed or have lost their jobs when international enterprises, but also local factories closed dawn.

An impressive number of Yemeni citizens had profited from employment at Embassies and cultural institutes and had all of a sudden been laid off – with all ex pats leaving the country.

Desperate families could no longer pay the rent in Sana´a and moved to the country side to stay with relatives, where their children can no longer attend school.

Also teachers have not received their salaries for more than two years which has contributed to the collapse of the educational system. In addition, not only hospitals but also schools have become a target for assault. In recent broadcasts the Houthis have been reported to have bombed at least four schools in Hajja. According to UNICEF “Out of 7 million school-aged children, over 2 million children are already out of school. School infrastructure is badly damaged and learning materials are in short supply. One in five schools in Yemen can no longer be used because they are damaged or being used by displaced families.”  A very sad explanation for the bombing is the fact that weapons are ever and again hidden in cellars but also deposited in ambulance cars …

And yet: So many Yemenis prove indefatigable, most of all children.

As illustrated by the photo below, they absolutely want to continue going to school and return to remaining ruins of their school premises to resume learning.

And, almost as a miracle, most of our YERO children could stay in Sana´ a and continue going to school, all are well thanks to Nouria´s supplies of clean water and food for all the families, made possible by the additional donations on the part of our sponsors. And for the ones leaving because of moving to the countryside or getting married Nouria has no problem finding happy replacements. 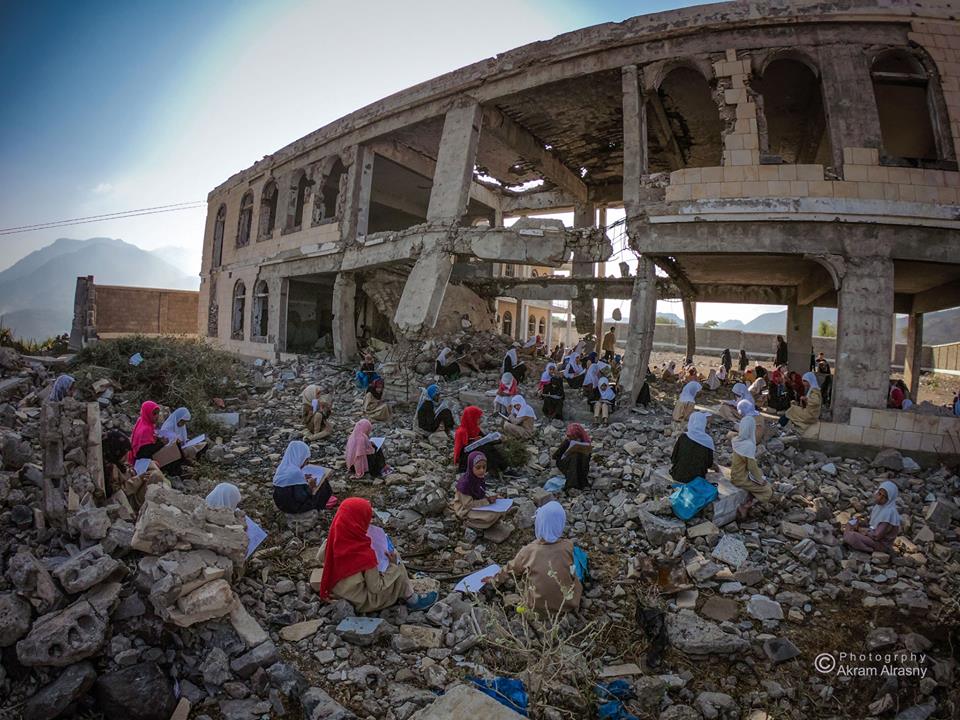