The negotiations having taken place with interruptions in Kuwait since April 10th to obtain a ceasefire in Yemen met with a new negative climax when a resolution drafted by OSEGY Ismael Ould Sheikh Ahmed at the UN Security Council was opposed by Russia.

Great Britain, represented by Peter Wilson, the deputy UN ambassador, had prepared a blueprint for the meeting of the UN Security Council, acting as patron of the discussions and having nominated Sheikh Ahmed as special envoy, on August 3rd in New York. As in all former resolutions  the text figured Saudi Arabia again as war party  and unduly favoured the Saudi-sponsored Hadi government “as internationally recognized“, thereby manoeuvring the Houthi-Saleh fractions into a realistically not valid position of a defeated and surrendering party.

After the break-up of the meeting Vitaly Churkin, Russia´s delegate in the Security Council, stated that “the council was almost ready to make a joint pronouncement in support of the political process” when a delegation made an unacceptable demand”. The countries setting unacceptable conditions once again were Great Britain and the USA, advocating in all previous resolutions and above all in the ill-fated Resolution 2216 a pro-Saudi position, obliging the Houthi-Saleh fractions to surrender and pull back from conquered towns before the start of whatever negotiations. The preconditions stipulated in this Resolution render a genuine peace agreement impossible since they permit the Hadi fraction, without making any further move, to insist uncompromisingly on compliance with Resolution 2216, which is unacceptable for the Houthi –Saleh fraction, and permit the Saudi belligerent party to continue bombarding Yemen, allowing for the death of many more children and, simultaneously, starve out the Yemeni population by blocking ports and airports.

The latest attempt of accusing the Houthis and Saleh for the failure of the negotiations was based on the setting up of a political council by the latter on July 28th, in Sana´a, judged as “unilateral procedure” not in line with relevant conditions. Great Britain and undisclosed other members of the Security Council (with Saudi Arabia in the background) intended to punish the Houthis for having revalued Saleh with this political council and reinstalled him in a public position.

The Houthis/Ansar Allah and the (remaining) Moutamar/Ali Abdullah Saleh had set up a political council of 10 persons (five per fraction) with alternating chairmanship in Sana´a on July 28th, to start intensive efforts to solve important problems – in the fields of economy, finances and reconstruction, and eclipse the military agenda. This makes all the more sense since Saudi Arabia is continuing the war with ever more means of economic pressure.

The news that the Houthis/Affash and Saleh/Moutamar announced the establishment of a joint political government with five members each in Sana´a was a bombshell in Yemen. The excitement and anguish is to be explained above all by the presence of Ali Abdullah Saleh, obviously prepared to take over a leading position in this new government, and the approval of this development by the Houthis. Saleh, since 2011 ex-president, in next to no time re-established his former authority with this TV Address. Although numerous proxies and party 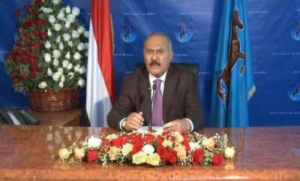 members had left him, had created new parties or sided with Hadi, and the Moutamar has become a sort of mock up party, it is, and has always been the person of Saleh radiating power and monitoring. As a result of Saleh´s high handed performance many of those who had hoped in 2011 that he will be gone for good, now fear his revenge. The oppressive powerlessness of the population vis-à-vis the ruling had been somewhat mitigated by the 2011 revolution but instantly flared up in the light of Saleh´s massive presence.

Above all in the South the population, already severely burdened by the political insecurity, permanently attempted assassinations and an alien government, is irritated by the new rise of the hated centralist Saleh. The tendency towards separation is massively promoted by this development. In addition, Saleh can still count on loyalty within the administration, of tribal sheikhs and the militia. 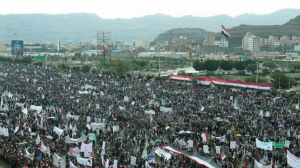 A big demonstration in pouring rain in Sana´a on July 29th clearly demonstrated how much backing the Houthis and Saleh still enjoy in North Yemen while Hadi still lives in Riyadh as “king without a people and a country” but is considered the “internationally acknowledged president of Yemen “ in faraway New York.

The fact that GB, the USA, France and at the time being also Egypt and Senegal, financially depending on Saudi Arabia, as not permanent members of the Security Council, act in line with this strategy to criticise the Houthis and support Hadi and his Saudi patrons cannot bring about a peaceful solution of the conflict. Since the parties involved are well aware of this fact their attitude must be spelled out as their obvious interest in a continuation of the armed conflict  – but under international supervision. Russia, the somewhat only country having maintained their embassy in Sana´a throughout the war, is increasingly backing the Houthis and opposing the above strategy.

However, despite support granted by the UN, Saudi Arabia cannot comfortably lean back because the advance of the Houthi-Saleh troops is uninterrupted in the South of Saudi territory.

Quite some astonishment caused a Houthi rocket with only 2 km reach reported to have hit the town centre of Samidah in the Saudi province of Jizan, a location at only 10 km air distance from the Yemeni border, evidence for its having been launched 8 km inside Saudi territory.  The advance of Yemeni troops – according to observers consisting half of Houthis and half of Saleh-loyal militia – extends over 200 km along the common border.